Thiamine, or vitamin B1, is an essential nutrient. This means it is required for the body to function properly, and cannot be made or synthesized by the body, and therefore must be obtained in the diet. 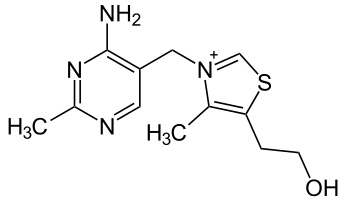 Thiamine participates in energy metabolism. Without thiamine, the body can become deprived of this energy, which results in weakness, weight loss, loss of appetite, and fatigue. Eventually, thiamine deficiency will affect the cardiovascular and central nervous systems, resulting in abnormal heartbeat, neurological symptoms, seizures, paralysis, and even death [source, source]. Although thiamine deficiency can be easily reversed by ensuring adequate thiamine is added to the diet, neurological damage and negative effects on learning and behavior can persist [source].

Since it is a water soluble vitamin, thiamine is only stored in the body in small amounts and is easily excreted in the urine. Thus, it is vital that dogs and cats obtain enough dietary thiamine on a regular basis. Cats require 2-4 times as much thiamine as dogs do [source].

Thiamine is present in meats, especially heart, liver, kidney, and pork. It is very sensitive to food processing techniques that involve heat, sulfur-based preservatives, or additives that alter the pH of the food such as thickening agents. Thus, commercial pet food manufacturers must add supplemental thiamine back into the food after processing.

Raw diets, having experienced minimal food processing and no cooking, do not have this issue and generally do not have to be supplemented with thiamine as long as the diet contains heart, liver, and/or kidney in sufficient amounts. However, thawing and refreezing may decrease the amount of available thiamine in the meat [source]. Most raw diets are low in carbohydrates, which may decrease the amount of dietary thiamine required by the body [source, source].

Thiaminase is an enzyme that breaks molecules of thiamine in half, rendering it useless and unable to perform the functions it is required for in the body. Even if the diet initially contained enough thiamine, the body can suffer from thiamine deficiency due to thiaminase activity.

Thiaminase is found in many species of fish and shellfish. Both freshwater and marine species can contain thiaminase.

Here is a list of some fish and shellfish species that do contain thiaminase:

Here is a list of some species that don’t contain thiaminase:

Reducing the risk of thiamin deficiency due to thiaminase

Cooking reduces thiaminase activity, but freezing has no effect. The longer a food that contains thiaminase is stored, the more thiamine is rendered unavailable. The greatest content of thiaminase is found in the viscera, particularly the liver, spleen, intestines, and heart of the fish [source].

Thiamine is destroyed after prolonged exposure to thiaminase; therefore, feeding fresh fish that has not been stored for any significant length of time will reduce the risk of thiamine deficiency (but would also carry the risk of parasites if the fish is not frozen before feeding). Feeding thiaminase-containing fish separately from other foods, such as in separate meals or on different days, or storing the fish in separate containers than other foods, will also reduce the risk of thiamine deficiency since the thiaminase in the fish will not have had time to break down the thiamine in the rest of the diet.

To prevent thiamine deficiency, you should do one or more of the following:

4 thoughts on “Thiaminase in Raw Fish”

This site uses Akismet to reduce spam. Learn how your comment data is processed.